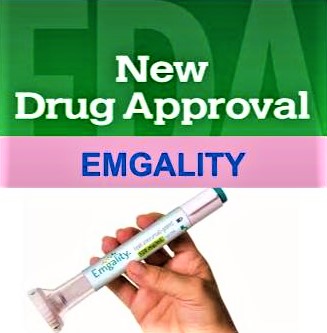 A new kind of drug

Emgality belongs to a new class of drugs called calcitonin gene-related peptide (CGRP) antagonists. CGRP antagonists were designed specifically to prevent migraines. Emgality is a brand-name prescription medication that’s used to prevent migraines in adults. It comes as a prefilled pen or syringe that you use to give yourself a monthly injection.

Emgality may be an especially effective option for people who’ve been unable to reduce their number of migraine days enough with other therapies. It may also be a good option for people who can’t take other medications to prevent migraines because of drug interactions or difficult side effects.

Side Effects  The most common side effects of Emgality are injection site reactions. This can include the following effects at the site where you inject the drug

Long-term side effects: Emgality is a recently approved medication in a new class of drugs. As a result, there’s very little long-term research on Emgality’s safety. The longest clinical study of Emgality lasted one year, and people in the study did not report any serious side effects caused by Emgality.

Call The Manhattan Center For Headache & Neurology to find out if you are a candidate for Emgality. Learn about the Emgality copay card!