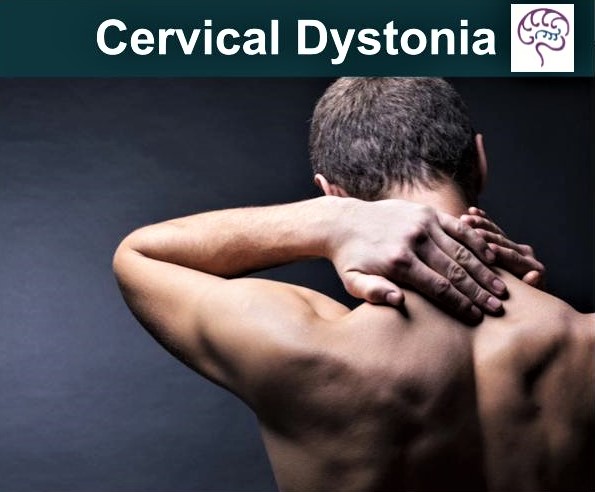 Cervical dystonia, also known as spasmodic torticollis, is the most common isolated focal dystonia seen in clinical practice. It affects the muscles of the neck and shoulders. Cervical dystonia may appear as horizontal turning of the head (torticollis), lateral tilt of the neck (laterocollis), flexion of the head (anterocollis), or extension of the head (retrocollis).
A subset of patients with cervical dystonia have an associated head tremor. In some patients, the head tremor is of relatively large amplitude, jerky, and irregular; other patients have a smaller-amplitude, more regular tremor that resembles essential tremor. A head tremor due to cervical dystonia is usually distinguished from essential tremor by the directional preponderance of the movement imposed by the neck dystonia.
Patients with cervical dystonia may also have an associated hand tremor that does not have dystonic qualities. Although still controversial, it is generally accepted that nondystonic hand tremor in cervical dystonia is a part of the dystonic syndrome, as opposed to reflective of comorbid cervical dystonia and essential tremor.
Isolated dystonia is separated from dystonia attributable to another underlying condition by the absence of additional neurologic abnormalities (with the exception of tremor) and the lack of a possible acquired.
The age and anatomic distribution of dystonia at onset are important clinical clues for diagnosis. Atypical presentations (eg, a child with onset of dystonia in the neck or face, an adult with onset in the leg, or an adult who develops generalized dystonia) are not characteristic of isolated dystonia; they indicate the need to evaluate for another genetic or acquired cause. Generalized dystonia is rare with adult onset. In such cases, an acquired etiology should be sought such as exposure to dopamine receptor antagonists.
Laboratory testing in patients with dystonia is part of the etiologic evaluation for suspected acquired and hereditary dystonias or dystonia with atypical features. The specific workup varies depending on age and associated clinical findings. A workup may also include neuroimaging such brain MRI or CT of head.
Contact The Manhattan Center for Headache and Neurology to evaluate and facilitate acute and extended management. Our exceptional providers are passionate about treating you!