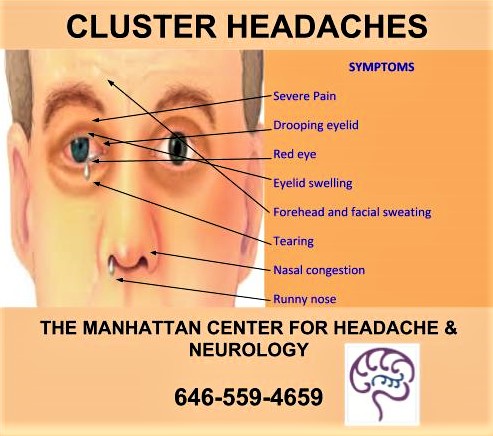 The term cluster headache comes from the recurrence of headache attacks usually in a series (cluster periods) lasting for weeks or months, separated by remission periods (periods of headache freedom) usually lasting months or years.

Cluster headaches are often said to be the most painful of all headaches. They have been described as “boring,” “bearing,” “burning,” “like a hot poker in the eye,” and as “suicide headaches.” The age of onset of cluster headache is most often between 20 and 40, and they are more common in men than women at a ratio of 3:1.

Cluster headache is a primary headache disorder that consists of severe headaches on one side of the head associated with :

Cluster headache is classified as a trigeminal autonomic cephalalgia or TAC:

Trigeminal refers to cranial nerve 5, which is the nerve that controls sensation of the face. For this reason, the pain associated with cluster headache often localizes to the face particularly around and behind the eye.

Autonomic refers to symptoms like red or teary eye, runny or stuffy nose, sweating or flushing of the face, drooping of the eyelid, or sense of fullness in the ear. In cluster headache, these symptoms occur on the same side as the pain.

Cluster headaches are attacks of severe pain lasting 15-180 minutes and occurring from once every other day up to eight times in one day—averaging 2 per day over typically 4-6 weeks then entirely disappearing for 6-12 months.

These attacks also include one or more cranial autonomic symptoms on the same side as the pain (ipsilaterally):

There are no diagnostic tests to confirm cluster headache. Diagnosis is accomplished by reviewing personal and family medical history, considering associated symptoms, and an examination. .

The most commonly used therapies to shorten or abort a cluster attack are: