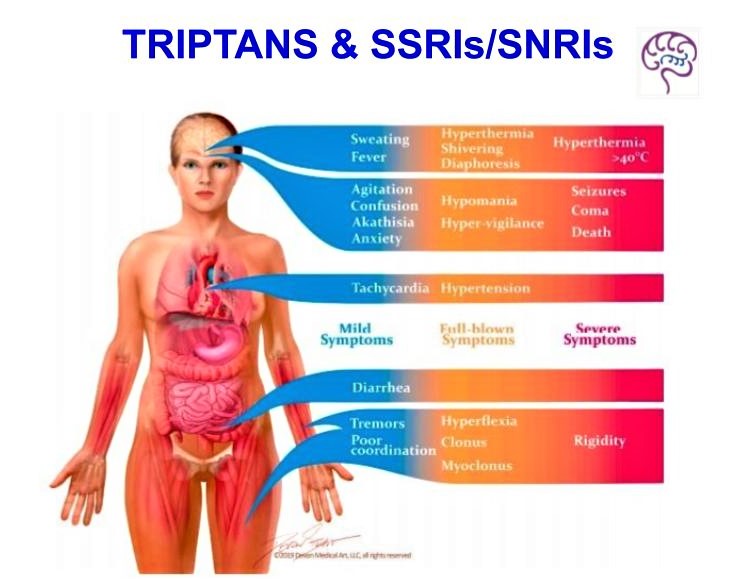 Serotonin is a chemical your body produces that is involved in many biological functions. Serotonin helps regulate your attention, behavior, body temperature, digestive system, blood flow, breathing and much more. Excessive accumulation of serotonin in your body can lead to serotonin syndrome. The most common symptoms of serotonin syndrome include skin flushing, diarrhea, rapid heart rate, elevated blood pressure, confusion and headache. Certain medications increase serotonin levels but serotonin syndrome usually occurs when there are multiple medications on board and when the individual is more susceptible to this reaction.
There are medications used to treat depression and migraine that modify serotonin levels. Migraine medications that effect serotonin are known as “triptans”. Medications for depression that modify serotonin include selective serotonin reuptake inhibitors (SSRIs) and selective serotonin/norepinephrine reuptake inhibitors (SNRIs). People who have migraines and depression may be prescribed both a triptan (for acute migraine treatment) and a SSRI or SNRI (for chronic treatment of depression).
The simultaneous administration of two drugs that promote serotonin’s activity theoretically could cause “serotonin syndrome.” Due to this potential risk, the federal FDA issued a warning to be wary of the co-administration of a triptan and an SSRI or SNRI. However, this warning was based almost entirely upon a theoretical concern and not upon scientifically derived clinical evidence. Clinically significant serotonin syndrome from simultaneous use of these medications appears to be extremely rare. Additionally ,the benefit of adequate treatment for both migraine and depression appears to far outweigh the exceedingly low risk of dangerous “serotonin overload”. Nonetheless, make sure your health care provider is aware of all the medications you are taking.
– Caroline Pruski, NP