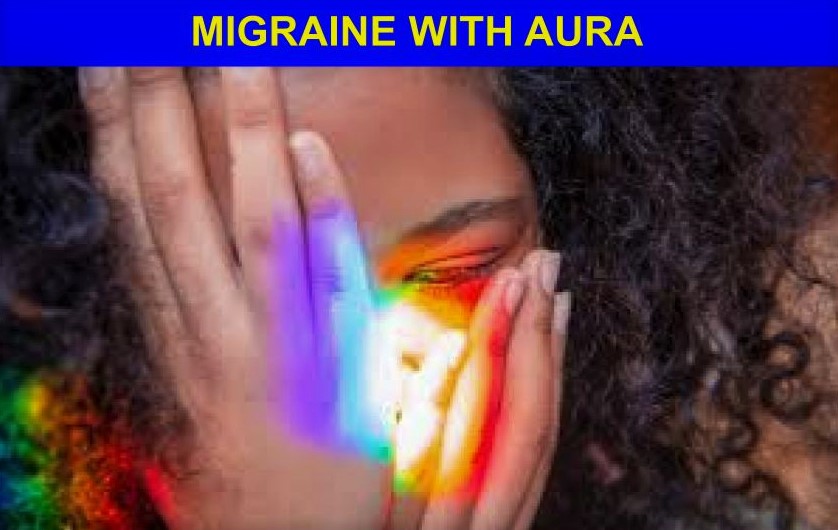 Aura can manifest as a mixture of positive and negative features. Positive symptoms indicate active discharge from central nervous system neurons. Typical positive symptoms can be visual symptoms for example ( bright lines, shapes, objects), auditory symptoms (eg, tinnitus, noises, music), somatosensory (eg, burning, pain, paresthesia), or motor (eg, jerking or repetitive rhythmic movements). Negative symptoms indicate an absence or loss of function, such as loss of vision, hearing, feeling, or ability to move a part of the body. Auras are most often visual, but can also be sensory, verbal, or motor disturbances.
A visual aura classically begins as a small area of visual loss often just lateral to the point of visual fixation. It may either appear as a bright spot or as an area of visual loss. Over the following five minutes to one hour, the visual disturbance expands margin and develops into geometric shapes or zigzagging lines.
Sensory aura is also common and typically follows the visual aura within minutes, although it may also occur without the visual aura. A sensory aura may be described as a tingling in one limb or on one side of the face. As the tingling sensation migrates across one side of the face or down the limb; it may be followed by numbness lasting up to an hour.
Less common than the visual and sensory auras is the language or dysphasic aura. Language auras cause transient problems for example mild difficulties with word finding to difficulty speaking.
Furthermore, motor aura, the limbs and possibly the face on one side of the body become weak, may also occur during migraine attacks.
Patients may also experience aura without an associated headache. Migraine aura without headache (also known as migraine equivalent and acephalgic migraine) manifests as isolated aura unaccompanied by headache.
The Manhattan Center for Headache and Neurology has competent providers to further evaluate and facilitate acute and extended management.
By: Jordan Shankle, PA