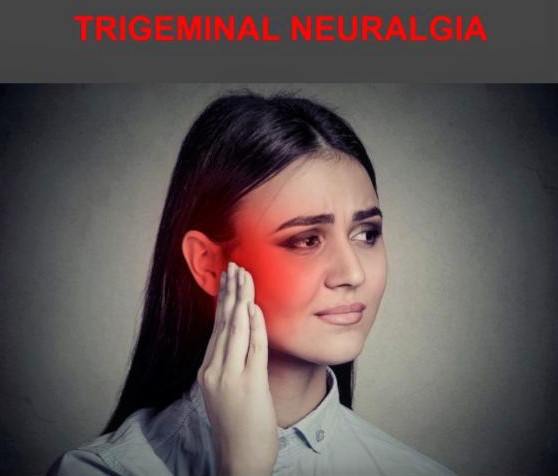 Trigeminal neuralgia(TN) is characterized episodic unilateral (one – sided) shock-like/ stabbing pain abrupt in onset and termination, in the distribution of one or more divisions of the fifth cranial (trigeminal) nerve that typically are triggered by stimuli. . It usually lasts from one to several seconds, but may occur repetitively, anywhere from 0 to more than 50 times a day. A refractory period of several minutes during which a paroxysm cannot be provoked is common.
The trigeminal nerve is the sensory supply to the face and the sensory and motor supply to the muscles of mastication. It has three major divisions. Compression of the trigeminal nerve root is the main mechanism of TN.
Nearly all patients with TN experience triggered. Trigger zones in the distribution of the affected nerve are common and are often located near the midline. Lightly touching these zones often triggers an attack, leading patients to protect these areas. Other triggers of TN paroxysms include chewing, talking, brushing teeth, cold air, smiling, and/or grimacing. Autonomic symptoms, usually mild or moderate, can occur in association with attacks of TN including excessive tearing, conjunctival injection, and nasal drainage.
The course of TN is variable. Episodes may last weeks or months, followed by pain-free intervals of weeks to years, although most remissions last for only a few months.
For more information regarding TN and treatment options please speak with your provider.