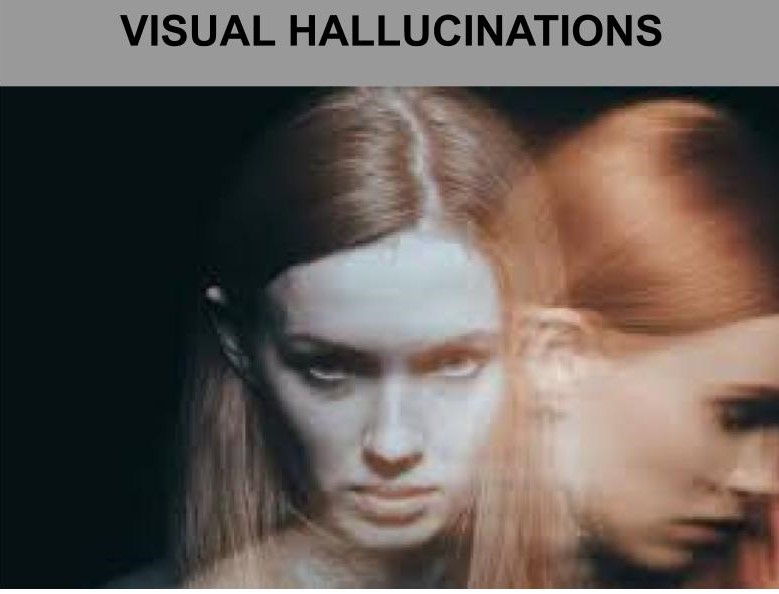 A visual hallucination is a perception of an external visual stimulus where none exists. Furthermore, a visual illusion is a distortion or modification of real external visual stimuli Examples of visual illusions include distortions of sizes, shape, and color. Visual hallucinations and illusions are clinically distinct phenomena, but have overlapping etiologies.
Simple hallucinations are also referred to as “elementary” or “non-formed.” They do not include complex imagery. Examples include lights, colors, lines, shapes, or geometric designs.
Migrainous visual hallucinations are usually simple and typically linear or geometric (ex, zig-zag lines) in appearance. The classic visual aura is the fortification spectra, which is considered pathognomonic for migraine. A scintillating scotoma is another common migraine aura; this is an area of decreased vision that is outlined by a hallucination with geometric design. Patients also describe seeing spots, dots, or shooting stars. Migraine auras tend to be black and white or monochromatic, and are more geometric and linear in shape compared with epileptic visual hallucinations, which are more often colorful and circular or spherical in appearance
Common associated symptoms include headache and other features of migraine nausea, vomiting, photophobia, and phonophobia
Migraine visual aura may occur independently of headache (sometimes called migraine equivalent or acephalgic migraine) and may be confused with ischemia.
Visual hallucinations are a clinical manifestation of neuroophthalmologic dysfunction resulting from a wide variety of underlying etiologies. They can be very disconcerting to some patients, regardless of their insight, and can significantly decrease quality of life.
Jordan Shankle, PA