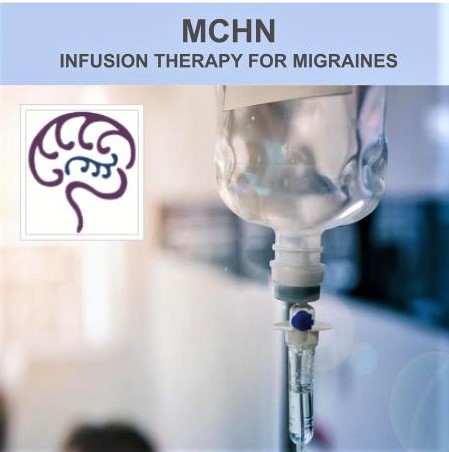 IV treatments provide fast relief and long term relief up to a month from the pain, nausea and inflammation associated with migraine and headaches. IV infusion treatments include fluids, supplements and medications that target the cascade reaction in the body resulting in migraines and headaches.The infusion of fluids is extremely beneficial with the associated symptom of nausea that commonly occurs with migraine and headache disorders. Nausea can lead to poor oral intake and at times vomiting, resulting in fluid loss. Dehydration worsens migraine and headaches, thus making them harder to treat.
Magnesium is a common supplement that is added to the fluid infusion. Studies show that magnesium can help prevent headaches and that the magnesium levels in a person’s brain may be low during a migraine. Toradol (Ketorolac) is nonsteroidal anti-inflammatory drugs (NSAIDs) that is added during the infusion to help reduce pain and inflammation. Zofran (Ondansetron) or Reglan (Metoclopramide) are both anti-nausea medications that are also added to the infusion, thus helping with associated nausea and vomiting.
In addition to the types of medications offered, IV infusion is the fastest route for absorption in comparison to taking medications orally or in injection form. Drugs delivered through the intravenous route circulate directly to the brain, within 20 to 40 seconds. IV route also has the greatest level of absorption, medications given through IV route have 100% bioavailability. IV route bypasses absorption barriers and first-pass metabolism (the phenomenon of drug metabolism whereby the concentration of a drug, specifically when administered orally, is greatly reduced before it reaches the systemic circulation).